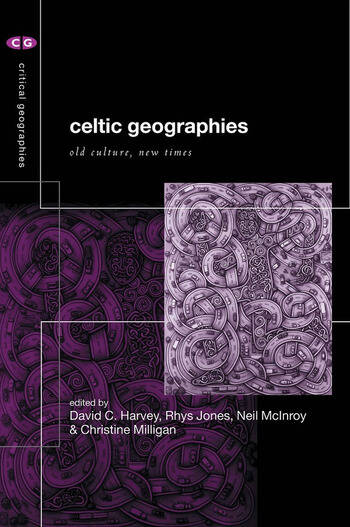 Celtic Geographies questions traditional conceptualizations of Celticity that rely on an homogenous interpretation of what it means to be a Celt in contemporary society. The various contributors break away from these traditional interpretations to critically explore a Celticity that is diverse in character. The book explores a number of themes that are central to historical and contemporary Celticity:
* the historical geographies of Celtic peoples
* devolution and politics in Celtic regions, such as Wales and Scotland
* the commodification of Celticity in the tourism practices of Brittany and Ireland
* the role of diaspora in the development of Celtic identities, in both North America and in the west of Scotland
* the relationship between Celticity and forms of contemporary culture.

1. David Harvey, Rhys Jones, Neil McInroy and Christine Milligan Timing and Spacing Celtic Geographies Part I - Othering and identity politics 2. Keith D. Lilley Imagined Geographies of the 'Celtic Fringe' and the cultural construction of the 'other' in medieval Wales and Ireland 3. Iain Robertson "Their families had gone back in time hundreds of years at the same place": attitudes to land and landscape in the Scottish Highlands after 1914 4. Gordon Macleod Identity, hybridity and the institutionalisation of territory: on the geohistory of Celtic devolution 5. John Osmond Welsh civil identity in the 21st century Part II - Sites of meaning 6. Hayden Lorimer Sites of authenticity: Scotland's new parliament and official representations of the nation 7. Steven Cooke and Fiona McLean Our common inheritance? Narratives of self and other in the Museum of Scotland 8. Moya Kneafsey Tourism images and the construction of Celticity in Ireland and Brittany 9. Euan Hague The Scottish diaspora: Tartan Day and the appropriation of Scottish identities int he United States 10. Amy Hale Whose Celtic Cornwall? The ethnic Cornish meet Celtic spirituality Part III - Youth culture and Celtic revival 11. Mark Boyle Edifying the rebellious Gael: the uses of memories of Ireland's troubled past in the West of Scotland Irish diaspora 12. Peter Symon From blas to bothy culture: the musical re-making of Celtic culture in a Hebridean festival 13. Alan M Kent Celtic nirvanas: constructions of Celtic in contemporary British Youth Culture Part IV - Epilogue 14. John G Robb Geography of Celtic appropriations

'The culture of the book in the Scottish Enlightenment is a fitting testimony to the richness of the eighteenth century Scottish book trade that is explored in insightful case studies.' - Luc Racaut, University of Glasgow for Scottish Studies Review