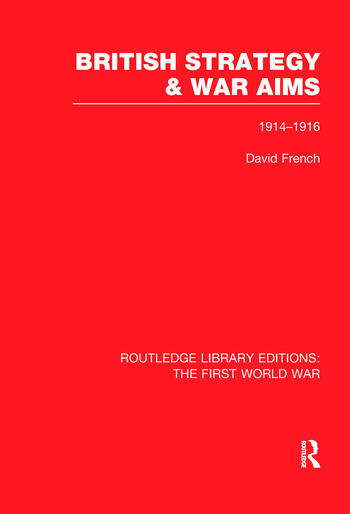 This book illustrates the relationship between British military policy and the development of British war aims during the opening years of the First World War. Basing his work on a wide range of unpublished documentary sources, David French reassesses for the benefit of students and scholars alike what was meant by ‘a war of attrition’.

Introduction. 1. The Ententes and the Security of the British Empire 2. Maritime Operations, August- October 1914 3. Russia, Turkey and the Balkans, September – December 1914 4. The Search for an Entente Strategy, December 1914 – February 1915 5. The Constantinople Agreement, Italu and the Collapse of the Asquith Government, February – May 1915 6. The Asquith Coalition and the Policy of Attrition, May – August 1915 7. Men, Money and Munitions: Mobilizing the British Economy for War in the Summer of 1915 8. Britain and the ‘Drang nach dem Osten’, 1915-16 9. Britain and the Development of the Entente’s Policies in the Winter of 1915 – 16 10. Verdun to the Somme, February to June 1916 11. From the Somme to Bucharest, July – August 1916 12. The Strategic Background to the Collapse of the Asquith Coalition 13. Conclusion: Victory or Bankruptcy?

Multivolume collection by leading authors in the field