Beating the Devil Out of Them
Corporal Punishment in American Children 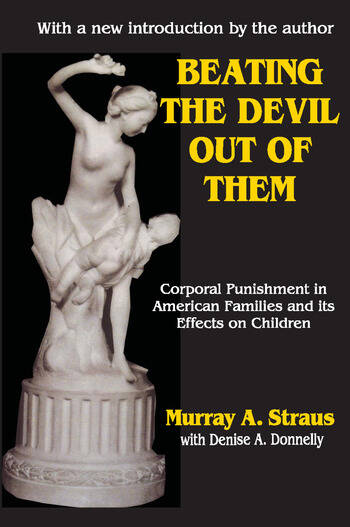 Beating the Devil Out of Them: Corporal Punishment in American Children

Based on his studies of over 9,000 families, Murray A. Straus, the foremost researcher on family violence in the world, discusses the extent to which parents in the United States use corporal punishment (such as spanking and slapping) and its effects on their chil-dren. The question of whether corporal punishment is an effective method of discipline is hotly debated. Straus contends that this believed-to-be-"minor" form of physical violence is precursor to much violence that plagues our world.

Children who are spanked quickly learn that love and violence can go hand in hand. Since spanking is generally done by loving, caring parents—for the child's own good—a child can learn that hitting is "morally right." Straus describes what he has learned through two decades of research: children who are spanked are from two to six times more likely to be physically aggressive, to become juvenile delinquents, and later, as adults, to use physical violence against their spouses, to have sadomasochistic tendencies, and to suffer from depression. Straus alerts parents to these risks, and argues that spanking adversely affects not only the children who are subjected to it but society as a whole.

This groundbreaking book, now available in paperback with a substantive new introduction and new concluding chapter, is essential reading for parents as well as teachers, lawyers, and judges. Professionals in fields such as social work, child protection, delin-quency and criminology, psychology, and politics will find it of critical importance.