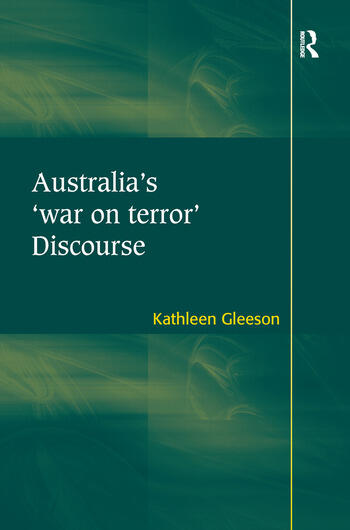 Too often, existing literature has conflated the discourses that enabled the 'War on Terror', ignoring the contextual specificities of the states that make up the ’Coalition of the Willing’. Australia's 'war on terror' Discourse fills this gap by providing a full and sustained critical analysis of Australian foreign policy discourse along with the theoretical synthesis for a specific model of critical discourse analysis of the subject. The language of then Prime Minister Howard is the primary focus of the book but attention is also paid to the language of key ministers, political opponents and other prominent actors. The voices of those who challenged the dominant discourse are also considered to shed light on the ways in which discourses can be destabilised. Kathleen Gleeson shows how Howard successfully invoked narratives of identity and sovereignty that resonated with his audience and promoted his reworked narrative of Australia whilst facing dissent from many actors who voiced their opposition most successfully when they capitalised on inconsistencies within the discourse.

Kathleen Gleeson is an independent researcher and writer. She holds a PhD in Politics and International Relations from the University of New South Wales, Australia and a Bachelor of Arts with Honours from the University of Newcastle, Australia. Her research interests are in political discourses and social change, political theory, democratic participation and international political systems.

"For scholars examining the causes of radicalization in Australia or those simply interested in the effects of certain narratives in national security policy making, Gleeson’s book is a must read. It should be equally appealing to those thinking about Australia’s current government politicking on terrorism because the further one reads Gleeson’s examination of Howard’s stance on national security and terrorism the more one sees history repeating itself."

’This excellent book stands out as the fullest critical analysis of Australian foreign policy discourse in the War on Terror. Developing a specific variant of Critical Discourse Analysis and weaving together the ideas of a range of critical scholars, Gleeson delivers a sustained deconstruction of John Howard’s foreign policy. It will be of great interest to scholars and students of foreign policy and the War on Terror in Australia and beyond.’

’Gleeson offers an incisive account of the construction of Australia’s post-9/11 War on Terror discourse. Her analysis of its architects and architecture provides the first detailed history of this unprecedented era in Australia’s security policy. In doing so, she also provides a compelling case for the centrality of discourse analysis in global security studies.’

’This theoretically sophisticated book does not only provide the best in-depth analysis of how the war on terror discourse was constructed in Australia. Its innovative combination of Foucauldian genealogical analysis and Critical Discourse Analysis also forges a powerful methodological tool that can provide major insights into how that discourse was constructed internationally.'