Apartheid Vertigo
The Rise in Discrimination Against Africans in South Africa 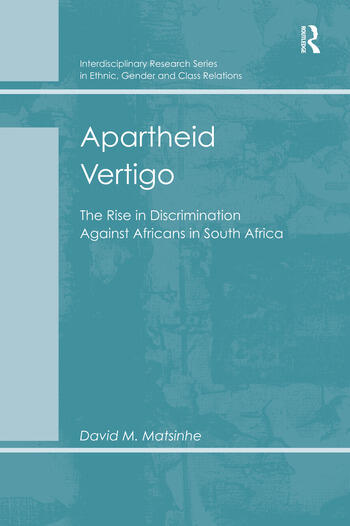 Apartheid Vertigo: The Rise in Discrimination Against Africans in South Africa

Apartheid vertigo, the dizzying sensation following prolonged oppression and delusions of skin colour, is the focus of this book. For centuries, the colour-code shaped state and national ideals, created social and emotional distances between social groups, permeated public and private spheres, and dehumanized Africans of all nationalities in South Africa. Two decades after the demise of official apartheid, despite four successive black governments, apartheid vertigo still distorts South Africa's postcolonial reality. The colour-code endures, but now in postcolonial masks. Political freedom notwithstanding, vast sections of the black citizenry have adopted and adapted the code to fit the new reality. This vertiginous reality is manifest in the neo-apartheid ideology of Makwerekwere - the postcolonial colour-code mobilized to distinguish black outsiders from black insiders. Apartheid vertigo ranges from negative sentiments to outright violence against black outsiders, including insults, humiliations, extortions, searches, arrests, detentions, deportations, tortures, rapes, beatings, and killings. Ironically, the victims are not only the outsiders against whom the code is mobilized but also the insiders who mobilize it. Drawing on evidence from interviews, observation, press articles, reports, research monographs, and history, this book unravels the synergies of history, migration, nationalism, black group relations, and violence in South Africa, deconstructing the idea of visible differences between black nationals and black foreign nationals. The book demonstrates that in South Africa, violence always lurks on the surface of everyday life with the potential to burst through the fragile limits set upon it and possibly escalate to ethnic cleansing.

'This is a fine book that critically addresses the highly under-researched area of how people from other Sub-Saharan African countries are subjected to overt forms of psychological and physical xeno-discrimination by those they helped liberate. Its timely publication should be appreciated by all students of post-apartheid South African history and politics, and it should instigate new debates in the area.' Ali A. Abdi, University of Alberta, Canada 'Traditional sociological theories of class and race struggle to explain the outbreak of aggression against migrants into the country from other parts of Africa. David Matsinhe makes brilliant use of Norbert Elias's theory of established-outsider relations in shedding light on "apartheid vertigo". It is enough only for people to be newcomers to make them vulnerable to the malice and resentment of other groups who differ from them in scarcely any other ways.' Stephen Mennell, University College Dublin, Ireland 'As the series editor observes, this sociological book offers an impressive scholarly explanation, and perhaps the hitherto most adequate scholarly explanation for the recent rise of xenophobia and discrimination of African foreigners in South Africa... Matsinhe skillfully combines and integrates various theoretical models into the general framework of figurational sociology. In this context he provides one of the most concise, clear and sophisticated expositions of Elias’s established-outsiders theory that I have seen... this book gives a great deal of valuable material and stimulating inspiration for further theoretical as well as empirical investigation...' Human Figurations