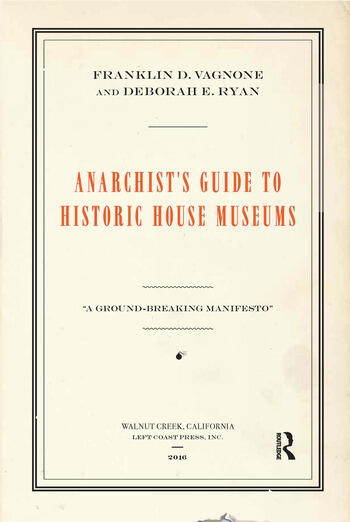 In these days of an aging traditional audience, shrinking attendance, tightened budgets, increased competition, and exponential growth in new types of communication methods, America’s house museums need to take bold steps and expand their overall purpose beyond those of the traditional museum. They need not only to engage the communities surrounding them, but also to collaborate with visitors on the type and quality of experience they provide. This book is a groundbreaking manifesto that calls for the establishment of a more inclusive, visitor-centered paradigm based on the shared experience of human habitation. It draws inspiration from film, theater, public art, and urban design to transform historic house museums while providing a how-to guide for making historic house museums sustainable, through five primary themes: communicating with the surrounding community, engaging the community, re-imagining the visitor experience, celebrating the detritus of human habitation, and acknowledging the illusion of the shelter’s authenticity. Anarchist's Guide to Historic House Museums offers a wry, but informed, rule-breaking perspective from authors with years of experience and gives numerous vivid examples of both good and not-so-good practices from house museums in the U.S.

Franklin Vagnone (Principal – TWISTED PRESERVATION: Cultural Consulting) with a strong background in the creative arts (Architecture, Design, Sculpture), is a Public Historian who has been labeled a "domestic-archeo-anthropologist", has over 25 years of transformational leadership in non-profit management, financial oversight, fundraising, strategic planning, board relationships, award-winning cultural program & creative place-making development. He has a thoughtful combination of philosophical and practical experiences that have allowed him to consult, lecture, and teach internationally for an extensive list of universities, cultural sites, museums, and community-based membership organizations.

While Executive Director of major historic house organizations in Philadelphia and New York City, his leadership has been recognized through, 2015 Museum Association of New York Individual Achievement Award, Two Lucy G. Moses awards from the New York Landmarks Conservancy, Award of Excellence from the Greater Hudson Heritage Network, Award of Merit from Museum Association of New York Award, and a Grand Jury Medal from The Philadelphia Preservation Alliance.

Franklin maintains the blog: Twisted Preservation, and the series "One Night Stand" overnights in historic house museums, which to date, has readers in over 85 countries - (http://twistedpreservation.wordpress.com/ ), and also moderates an international discussion group – The Anarchist’s Guide to Historic House Museums.

He has co-authored The Anarchist’s Guide to Historic House Museums (with Ms. Deborah Ryan) – a book about innovative concepts for historic cultural sites. The book, now in its 3rd printing since November 2015, was voted best Museum Education-related book of 2015 by Museum Educator’s Monitor, and became #1 bestseller (Museum-related) on Amazon for February 2015.

Deborah Ryan, RLA is an associate professor of architecture and urban design at the University of North Carolina Charlotte, USA, where she founded the Charlotte Community Design Studio as the community outreach arm of the university. As director of the Mayor’s Institute for City Design: South and the Open Space Leadership Institute, she led symposia that taught local leaders how to face growth issues in their communities. Ryan has also served as a faculty member at the Graduate School of Design at Harvard University, USA, and as a visiting critic at Columbia University, USA. Ryan designed and developed Wikiplanning™ as an online site for increasing civic engagement in the community planning process. She has published and lectured widely on the subject of community engagement, and in 2013 she was named a Senior Edward I. Koch Fellow by the Historic House Trust of New York City to lead civic engagement efforts for the LatimerNOW project.

"The tone of the book is blunt, but I think that is necessary. The whole historic-preservation industry is so deeply rooted in either a 'Jackie Kennedy' faux-gentility or a dead-white-men's 'this is how history is done, boys!' approach to everything."— Ulysses Dietz, Chief Curator and Curator of Decorative Arts, The Newark Museum

"I enjoyed reading this book very much. It is written in accessible language, making complex matters very approachable. The authors have also provided a lot of concrete examples, so there is little guessing at what they are trying to say. Virtually anyone in the cultural world could take this book and find elements that are relevant to his or her work."— Lisa Ackerman, Executive Vice President and Chief Operating Officer, World Monuments Fund

"If you are a traditionalist, you might think that Vagnone and Ryan are heretics, blasphemers or, at the very least, bomb throwers. You may be right. Many of the ideas in this book go against the standard rules of museum practice. But this is, for many historic house museums, a time of crisis, and crises require bold action and creative thinking. The Anarchist s Guide encourages us to think differently, to challenge conventional procedures, to put visitors first, to take risks."— From the Foreword by Gretchen Sullivan Sorin, The Cooperstown Graduate Program

"A book that is precisely what the doctor ordered for a patient on life support .It is not overstating the situation to opine that Vagnone and Ryan, in the "Anarchist s Guide," have launched an important campaign for change that might well determine the future of the past by starting a discussion that is long overdue."— Taylor Stoermer, The History Doctor

"The Anarchist's Guide is a timely reminder to think long and hard about what and who museums are for, and about what expertise this requires. Connoisseurship alone does not a great museum make. It is the careful balance of objects, buildings, and people that brings it to life." — Katy Barrett, Royal Museums Greenwich, Apollo Magazine