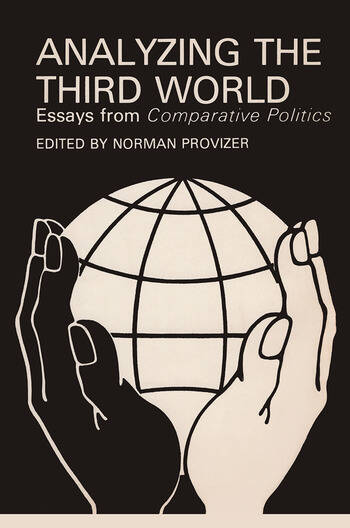 This book presents essays from Comparative Politics which analyze the Third World in terms of commonally shared intra-state dynamics. It draws attention to the internal attitudinal, behavioral, and organizational problems and transitions which characterize Third World countries.

1. Introduction and Overview: The Idea of the Third World Part I: Comparative Politics, Modernity, and Change 2. "Comparative Politics and the Study of Government: The Search for Focus" 3. "The Change to Change: Modernization, Development, and Politics" 4. "The Attitudes of Modernity" 5. "The Problem of Identity, Selfhood, and Image in the New Nations: The Situation in Africa" Part II: Politics and the Social Order 6. "Political Clientelism and Development: A Preliminary Analysis" 7. "Participation and Efficacy: Aspects of Peasant Involvement in Political Mobilization" 8. "India’s Urban Constituencies" Part III: The Organization of Politics 9. "The Politics of Predevelopment" 10. "The National Electoral Process and State Building: Proposals for New Methods of Election in Uganda" 11. "Democracy and Social Mobilization in Lebanese Politics" Part IV: Politics and the Men on Horseback 12. "The Praetorian State and the Praetorian Army: Toward a Taxonomy of Civil-Military Relations in Developing Polities" 13. "Military and Society in East Africa: Thinking Again about Praetorianism" 14. "A Comparative Analysis of the Political and Economic Performance of Military and Civilian Regimes: A Cross-National Aggregate Study" Part V: Leadership and Public Policy 15. "The Comparative Analysis of Political Leadership" 16. "Leaders and Structures in 'Third World' Politics: Contrasting Approaches to Legitimacy" 17. "Revolutionary and Managerial Elites in Modernizing Regimes" 18. "Political Mainsprings of Economic Planning in the New Nations: The Modernization Imperative Versus Social Mobilization"