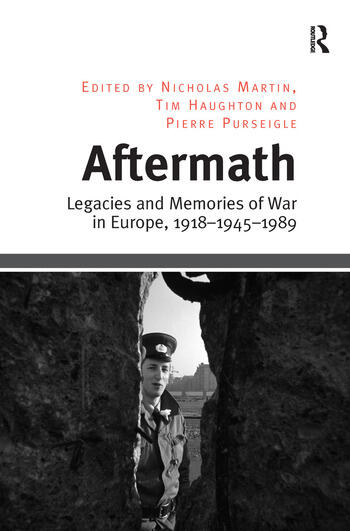 Focusing on three of the defining moments of the twentieth century - the end of the two World Wars and the collapse of the Iron Curtain - this volume presents a rich collection of authoritative essays, covering a wide range of thematic, regional, temporal and methodological perspectives. By re-examining the traumatic legacies of the century’s three major conflicts, the volume illuminates a number of recurrent yet differentiated ideas concerning memorialisation, mythologisation, mobilisation, commemoration and confrontation, reconstruction and representation in the aftermath of conflict. The post-conflict relationship between the living and the dead, the contestation of memories and legacies of war in cultural and political discourses, and the significance of generations are key threads binding the collection together. While not claiming to be the definitive study of so vast a subject, the collection nevertheless presents a series of enlightening historical and cultural perspectives from leading scholars in the field, and it pushes back the boundaries of the burgeoning field of the study of legacies and memories of war. Bringing together historians, literary scholars, political scientists and cultural studies experts to discuss the legacies and memories of war in Europe (1918-1945-1989), the collection makes an important contribution to the ongoing interdisciplinary conversation regarding the interwoven legacies of twentieth-century Europe’s three major conflicts.

Contents: Preface; Introduction: through the fog of war, Pierre Purseigle; Generations and the ruptures of 1918, 1945 and 1989 in Germany, Mary Fulbrook; Times of death: the Great War and Serbia’s 20th century, John Paul Newman; Politicising commemoration in 20th-century Latvia, Geoffrey Swain; Pluralism and the problem with collective memory: Japanese peace and war museums in a comparative context, Aaron William Moore; Beyond mental: avant-garde culture and war, Stephen Forcer; Between cultural conflict and cultural contact: German writers and cultural diplomacy in the aftermath of the First World War, Tara Windsor; The haunting of Roland D.: Roland Dorgelès, remembering the dead, and the long aftermath of the Great War (1919-1940), Martin Hurcombe; Defining deaths: Richard Titmuss’s Problems of Social Policy and the meaning of Britain’s Second World War, Dan Todman; Remembrance, religion and reconciliation after the fall of the Soviet Union, Gabriela Welch; Thinking about silence, Jay Winter; The long shadows and mixed modes of history: concluding reflections on the aftermath and legacies of war, Tim Haughton and Nicholas Martin; Bibliography; Index.

Nicholas Martin is Reader (Associate Professor) in European Intellectual History, and Director of the Institute for German Studies at the University of Birmingham. He is Editor in Chief of Forum for Modern Language Studies. His research interests lie in modern German intellectual history - especially the ideas of Nietzsche and Schiller - and in the cultural history of war and political violence in twentieth-century Germany. Tim Haughton is Reader in European Politics at the Centre for Russian and East European Studies, at the University of Birmingham. He is author of ’Constraints and Opportunities of Leadership in Post-Communist Europe’ (Aldershot & Burlington, 2005) and editor of ’Party Politics in Central and Eastern Europe: Does EU Membership Matter?’ (London, 2010); and 'The JCMS Annual Review of the European Union’ (Oxford, 2009-present). He was Director of the Centre for Russian, European and Eurasian Studies from 2012-14. Pierre Purseigle is Marie Curie Research Fellow in the Department of History at Yale University and Associate Professor in Modern European History at the University of Warwick. He is President and co-founder of the International Society for First World War Studies, and author of ’Mobilisation, Sacrifice et Citoyenneté. Des communautés locales face Ã  la guerre moderne. Angleterre - France, 1914-1924’ (Paris, 2011); and editor of ’Warfare and Belligerence. Perspectives in First World War Studies’ (Boston - Leiden, 2005).