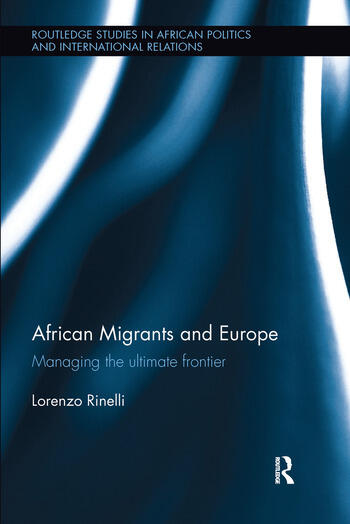 The process of migration control mirrors the trajectories of the people who traverse national boundaries, making today’s borders flexible and fluid.

This book explores the transformation of migration control in the post 9/11 era. It looks at how border controls have become more diffuse in the face of increased human flows from Africa and presents a critical analysis of the dispositif of European migration control, including detention without trial, derogation of human rights law, torture, "extraordinary rendition", the curtailment of civil liberties and the securitization of migration. By examining the role of Gaddafi’s Libya in the last ten years as a gendarme of Europe, it argues for a re-visioning of borders and frontiers in ways that can account for their dialectical nature, and for the dialectical nature of political life.

Lorenzo Rinelli is Teacher and Researcher at the University of California in Rome, Italy.

Media images of desperate refugees drowning or washing up on the shores of the Italian island of Lampedusa have become all too common. But to European eyes these images mislead as well as they inform. They exoticize and distance immigrants from "normal life." So, how to humanize African migrants, whose trajectories seem alien to the experience of metropolitan Europe, without sentimentalizing them? This amazingly acute and timely reflection shows how the marginalized, in the form of African refugees, cast light on the actual norms of the dominant "center" – Europe, Italy, Rome – that they enter if they survive their arduous journeys. Crucially, migration across borders isn’t the exception that normal European life today presupposes. All of humanity is descended from people who originally came out of Africa. We shouldn’t forget this. The borders all came much later.

Set in beautiful prose, Rinelli's illuminating study on the dynamics of African migration to Europe blends righteous indignation with penetrating analysis in ways that inform, engage, and inspire specialists on the subject and general readers alike. Focusing on instrumental security practices that seek to 'externalize' migration control and thereby render the plight of African immigrants invisible to the privileged eyes of the global North, Rinelli enriches his political analysis with an artist's attention to visual modes of representation. Given the enormity of the unfolding migration crisis in the Mediterranean, I can think of no other book that offers a more sophisticated approach to the topic.

"What is Europe?" This is the compelling question this book asks, moving back and forth from the Sahara Desert to the Island of Lampedusa, from the choppy waters of the Mediterranean Sea to the city of Rome. Interlacing histories, experiences, and images of African immigration in Europe from the angle of a political understanding of the border, Lorenzo Rinelli has written a highly original and challenging book that questions Europe and Africa distinctions based on birth, citizenship and territory.

Lorenzo Rinelli’s book is much more than a mere report on the humanitarian crisis associated with the contemporary migration flow from Africa to Europe. It’s a compassionate, historically-informed reflection that brings nuanced ethico-political analysis to the issues; it’s an extraordinarily articulate piece of writing that engages the historical trajectory of the flows with sophisticated conceptual thinking; and it’s an expansion of the boundaries of the problem well beyond what one learns from international media. Everyone – governmental officials, scholars, students, and members of a global, policy-interested public  - should read Rinelli’s book.